‘Kux, Castelbarco’ Stradivari viola will be auctioned on October 31 in London 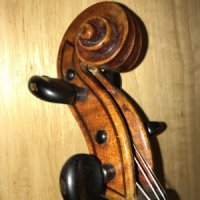 By GeorgeH
September 7, 2022 in The Auction Scroll